gameboy9 wrote:... Yeah, it definitely takes some practice to control the character. Reminds me of controlling Mario from SMB1 in the air... you really couldn't do it very well.

I played alot of SMB on the NES many years ago (and a little Vs. SMB last year: http://replay.marpirc.net/r/suprmrio) and loved the steering/psychics (you can't stop a runnng, 200 lbs. plumber "on the spot"..! c",) )

Another favourite on the NES was Balloon Fight.. Again, nice "psychics-engine". (If you don't know the game Vs. Balloon Fight http://replay.marpirc.net/r/balonfgt).

Discovered Joust last year, hoping it would be like Balloon Fight,, or the other way around, actually.
But Joust use the feature of "going out on one side of the screen and coming back in the opposite side".. A lot.. My simple mind couldn't multitask left/right incoming enemies with last minute angle changes!! In Balloon Fight it isn't as predominant a feature.
....So I dropped the game after less than 1 hour

Now, thanks to this great Time Trial, I now am happily playing Joust..

Here's my view on The Belly Flop:

Not a desirable "bug" when it happens unintentionally. ----- http://en.wikipedia.org/wiki/Joust_(video_game)
Bad: when it squeezes you through the 2 adjescant platforms and into danger,
Worse: when you push the joystick back to decrease speed or stop, and the ostrich bumps on it's belly instead of deploying the landinggear(!)
Worst: when bumping along a platform, your takeoff gets impaired - i.e: 2 flaps will not give you the same height as "legs-out" does..

The belly of your ostrich can potentially be used for some good,, for example if you'r on an upper platform
and 2finger/double-flap like crazy, it will rocket you up and hit the top of the screen. Going down fast,
don't flap until right after you hit the platform with the belly.. If successfull, you will go all the way to
the top of the screen again with 1 or 2 flaps, in a brief state of zero gravity (I have an .inp ?)
Also known as the "B.0.G." stunt/maneuver (Just made that up - get it?

Pterodactyl:
Haven't quite figured out the best (consistent) way to kill 'em.. Terror-dactyl!

PS: Funny coincidence,, one of the participants signed on for this Time Trial, Redelf, has a 4(+?) hours recording of Joust for MAME, and 55(+?) hours on the real deal..
Too bad (good for us!) he didn't have time to play in TT2..
Top

DaLar wrote:PS: Funny coincidence,, one of the participants signed on for this Time Trial, Redelf, has a 4(+?) hours recording of Joust for MAME, and 55(+?) hours on the real deal..
Too bad (good for us!) he didn't have time to play in TT2..

I live to play another day.... the controls in this game makes my face go like this


1up wrote:I live to play another day.... the controls in this game makes my face go like this

Yeah, I can't disagree with you there. Sometimes, that's the way you have to go. I'm thinking the next game will have better controls though.
Gameboy9 - Founder and coordinator of MARP Time Trials and Olympiad
Founder - Home Action Replay Page - http://www.homeactionreplay.org
http://gameboy9.marpirc.net
Top

You're right..woo-hoo! I'm back in 1st place (at least temporarily

Check out the egg-distribution on wave 5 in my 10min. run: 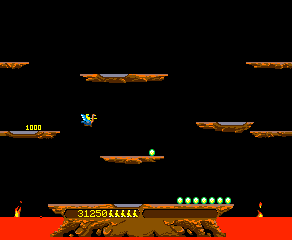 I was wondering why you use the formula conversion for all the games ?

During playback, when you push on TAB and go to Bookkeeping info, then you can see the Uptime which is the exact time calculated with automatic conversion by mame.

@Sawys: Well, you do raise a good point. Something for me(or the next coordinator, should I be defeated in the elections

) to keep in mind for next year... as in just do XXFFFFF where X is stages completed, and F = 100000 - frames used. Then you don't have to go through the further conversion, unless you want to.

Unfortunately, I can't put this into effect this year, because the last qualifying game before the big finish won't use the frame counter.
Gameboy9 - Founder and coordinator of MARP Time Trials and Olympiad
Founder - Home Action Replay Page - http://www.homeactionreplay.org
http://gameboy9.marpirc.net
Top

I finally reached the 17th wave but i had only this "saturday" day to play, i don't think that i could play tonight or tomorrow.

One thing using frames, it's more accurate. Counting gameboy's score, there's 4 that cleared 12 levels...while none of them have the same time, it was certainly possible...if they would have, it'd be VERY unlikely they also had the same framecount

Heh, just improved my score, but only by 2 seconds (124 frames)...not sure if it's worth submitting or not. Ended on the same level, 18.
Top

I finished the game out, so the INP actually goes a few more waves before I had a meltdown with the shadowlords.
Top

(is hiding in the fail corner)

Really, I can't get far with this game, and quite everybody has reached 13th stage? Am I so loser...?

Probably yes...
---
giro-X (also LUX, Luke, Red Ryuu) - member of Mame Retro Avengers team
[about my team]
[my MARP profile]
[YouTube channel with replays of stuff I did for or outside MARP]
[For contact on Telegram - state who you are please]
Top

Scores for this round are finalized. Additionally, I have standings after 3 rounds posted below the leaderboard for this round. A thrilling competition in the Joust... I was worried about the controls, but it turned out that one more player completed the game than those who completed Knights Of The Round. Now, granted, the later time trial was longer, but still, this was a toughy. I actually thought I was going to get a good ranking even up to Sunday morning (EST), but, alas, I had a tough time even getting to round 13 consistently, so I wound up with only a mediocre ranking.

I can't say the next one will be easier in difficulty, but the controls will be significantly better, yet still somewhat realistic... (and hopefully I'll have a chance to get a good ranking?