Frank Zappa wrote:It is not necessary to imagine the world ending in fire or ice. There are other possibilities; one is paper work, the other is nostalgia.

by tar
PEACE on earth and good will unto all whom G** favors.
yes even AL . by tar
New Orleans is under water once again due to high pressure system
over Texas
wonder where the water will Go?
LAKE champaigne is full
saw a water Spoute on the tube
Last week.
later, tar
--------------------------------------------
Rainin' around here too
we needed it
staying sober one day at a time in A.A.
been mildly intoxicated 3 times in a month
Beer
like to have one but can't if i want to live in the building downtown
my a.a. sponsor is the landlord.
gotta grow up to be a man sometime
17 years old in certain ways
i have not much patience w/games & Amusements
although it's nice to see some new arrivals at marp
Nibbler 69 got
goin' on 39yrs in March

8180 on QUASAR DARN! got it on floppy
have 2 old computors at home that work
a 233megahertz and an old 150megahertz
main processor speed Pentium
one is 12 years old other is 11.
Free to me
people give the stuff away
Playing Lara Croft's
origanal
Tomb Raider Gold
3 bucks
on the board called
The Cistern
cool
by tar
Earth & Air by tar
tornadoes hitting the gulf of mexico , hmm... i wonder who knew a week early?
by tar
hate ta say i told ya so But...
CALIFORNIA , yippie yay aye mofo.! 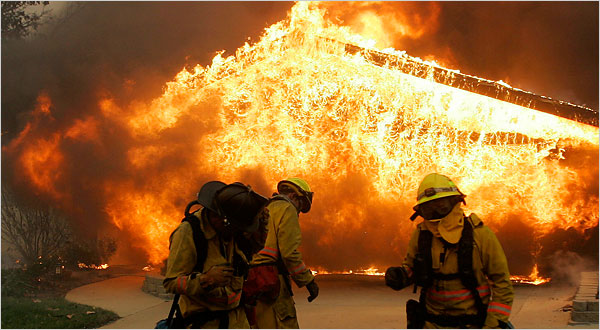 skito , leave and go to Colorado where yer dad"s familia estan.
by Chad
i think it's yippee cay yay.

too true, wind blows, fire burns, rain falls. closer this time but not engulfed. i'm sort of disgusted by all the aid that is given when many families will not be helped who were let go by their insurance companies because the fire coverage only works from an internally started fire and not from flying cinders, where is this "aid" going to, big non profit corporations (red-cross) to give it to their vp's as bonues. yep they have to get rid of that aid somehow so they won't profit from it.
by tar

A cool breeze blowing in from the Pacific Ocean kept temperatures low and moisture levels high Sunday, while 30 aircraft repeatedly dropped fire retardant and water that snuffed out most of the flames. Early Monday, two more planes were back in the air.

The fire was 90 percent contained Monday after burning more than 4,900 acres. Fire officials said they hope to have the blaze under control by 6 p.m. Monday.

Residents made their way back Sunday to see if their homes were among the 53 that were burned to the ground. Several homes along Corral Canyon Road, which bore the brunt of the blaze, were reduced to blackened wrecks, while many others were virtually unscathed.

"There's no rhyme or reason to it," said Frank Churchill, who returned home with his wife and four children to find his white stucco home largely undamaged, while three neighboring homes were leveled. "It doesn't make sense."

Thirty-four other homes were damaged and as many as 14,000 people were evacuated from the blaze, which was whipped up by hot, dry Santa Ana winds.

Gov. Arnold Schwarzenegger surveyed the damage and hugged Jennifer Grossman who returned from a trip to find her home destroyed.

"This is very, very sad," Schwarzenegger said to Grossman. "We're going to help you."

Malibu was still recovering from last month's 4,565-acre Canyon Fire that destroyed six homes, two businesses and a church when the winds began whipping up again.

"You think it's over for the year, and then, it's here we go again," Montebello City Fire Capt. Fernando Peliaz said as his crew soaked down the still-smoldering remains of a home.

Hundreds of firefighters and equipment from throughout the state had been positioned in Southern California for most of the week because of the predicted Santa Ana winds.

Investigators said the fire, which broke out along a dirt road off a paved highway, was caused by humans, but they had not determined if it was started intentionally, county fire Inspector Rick Dominguez said.

Sheriff's deputies with bloodhounds were seen headed into the area that residents said is a popular spot for outdoor partying by young people. Several locals were convinced the fire was started by late-night revelers who may have lit a campfire.

"I've been up there and seen howling groups of teenagers drinking," Corral Canyon Road resident Ricardo Means, 57, said of the rugged spot near the far end of the winding road where blackened beer bottles could be seen littering the ground.

Malibu, with homes tucked into deep and narrow canyons along 27 miles of coast on the southern foot of the Santa Monica Mountains, is prone to Santa Ana-driven wildfires. Among them was a 1993 blaze that destroyed 388 structures, including 268 homes, and killed three people.

Saturday's fire was west of the areas of Malibu that burned in October. Despite the constant threat of wildfires and other natural hazards, residents seem to love living here. A sense of community, quietness compared to Los Angeles and proximity to nature are all cited by locals.

"It's just tranquility after madness of the city," said stem-cell researcher Denis Rodgerson, whose house survived. "It's a nice place."

sorry to hear about this skito.
i saw live footage saturday on CNN.
by LN2

by tar
45 people have perished in extreme weather south of here...
a bunch of tornadoes , cyclones , twisters
there goes the neighborhood.

by tar
skito , are you alright ?
how close to the devastation?
in previous posts i did not intend to be mean
in my opinion , California is no more sinful than any other segment of America
people are a mix of good and evil
we are just as bad here in Ohio
The United States is being tested and reprimanded
by a Power greater than any mere human.
we are all to blame
it floods like crazy here
mold ,mildew, virus ,infections , blight , crops washed out
this year it has been really good weather , followed by
really[bad] rainy weather
kind scarey
p.s. i caught yer 111k pulsar at 100% speed
5,000kb .inp
pretty good man
i tried and could only get about 30k or so after a few tries.
41a i saw yer 114k galaxian midway older a few days ago at normal speed.
been busy ,summer here in northern hemisphere
house to tend to
later ,
tar

by Chad
pretty far away from it this time, at least for now. don't worry about bashing california for anything, everyone deserves it once in a while. somepeople are trying to blame an electric company for the fires last year (bad wiring was found near the epicenter), maybe that can give the home owners who got tossed by insurance companies some releif. thanks for watching, never thought i could top my previous 85k, but there are a few tricks i learned you can use to get by on the fast levels. alessandro is really stepping up too.

by Alessandro.S
We're having the most soaked March-July ever in northern Italy - as far as my memory goes. Even my mom says she never saw the river with this much water at this time of the season - and she's been living by the river for most of her 67 years.

Don't remember ever seeing these many rainy days, lake Como getting out of its boundaries twice in a week in July, last night in the umpteenth thunderstorm of the season I even got to see a snowflake lightning - apparently blasting rays from a central point. Wohoo !
All I drank was a glass of white Riesling wine, in case one wonders...

Hope this California-on-fire doesn't become too much of a regular thing now... as per my inps, what about the 181K on galap1

lots of fire on the galaxians there !

Funny, on my tv there's a Simpsons episode about to begin with Bart writing on the blackboard

"tar is not a plaything"