Golden Era Game of the Week

Further Bounty: none for money, but I have a 2006 GEGOTW t-shirt for the first entry which features a grand slam. For those not familiar with American baseball, that is a home run hit with the bases loaded, scoring four runs. Note the accomplishment in your upload description if submitted to MARP or attach the inp to a post here. {EDIT: Claimed by destructor 7/15/06}

Wanted to do another sports game this time. This is actually not a bad baseball game for 1983. How far the industry has come...

Page about the game:

Random prize: One player scoring in excess of my own 16,860 points, selected randomly from those who do will receive a copy of The Ultimate History of Videogames by Steven Kent: 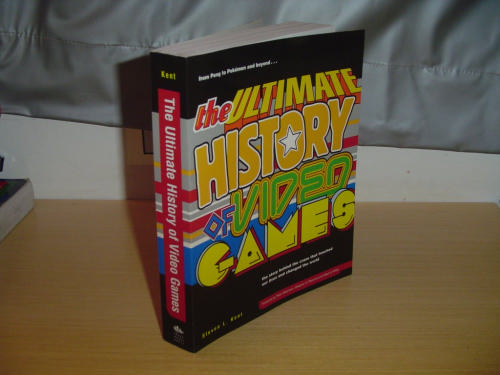 What is grand slam?

ok, Gegotw belongs to Wee and he decides the games

But baseball and Robby Roto ... bah

If you know what a home run is, a grand slam is a home run hit with men on first, second, and third bases.

If someone can manage to score runs unceasingly, so be it. Worth seeing, I think.

I think the traditional GEGOTW one hour time limit is the best way to compete for the weekly prize.

Ah yes, I know what is home run. For grand slam all 3 mens must be on all 3 bases before home run.
I have inp with home run.

Hey guys... how can Federer enter on the field to achieve a grand slam??? I am not understanding...

Yes, the same address and XL.

EDIT
I still don't know where is key to get score over 1mln. Here must be method for better use my batter -> less OUTs. But where is real key?

Us non-Americans should never be forced to suffer from baseball or "football" games. In Finland there's this sport called "pesäpallo" -similar to baseball, it's supposed to be a national sport..but they rarely ever show it on TV...wonder why...
Top

destructor wrote:But where is real key?

Here is the key to score high on this game.

I had figured it out so it's likely the same strategy the WR holder used.

I did it one day "accidentally" in playing with a full swing hit that was like a bunt and figured...whoa, I can repeat this over and over again by bunting.

My personal using the below technique was around 600k.

It does take good timing to maintain though.

Now for the next batter, BUNT(as JTC pictured above!)...and start your runners!

The fielder will throw to home plate to try and get the runner coming from 3rd base.(if there were 2 outs, then the fielder just throws to first base for the last out)

So you for a moment redirect your runner back toward 3rd once the ball is on the way home...then the catcher then throw toward second base to try and get your other runner.

Then immediately send your 3rd base runner back toward home once that ball is on the way back toward second.

The throw is too late to get the runner at home plate...then the catcher throws to third base...again too late....runner safe.

All runners safe....1 run scored...still have 1st and 3rd base runners.

JTC, I think for this bounty challenge this technique can't be allowed.

it is a gray area for TG...although a couple years ago when we discussed this I could not remember the exact details of this tehcnique...but now I suddenly do. hehe

Have fun with it!
Top

LN2 wrote: The fielder will throw to home plate to try and get the runner coming from 3rd base.(if there were 2 outs, then the fielder just throws to first base for the last out)

But I try and the fielder when I bunt throw the ball on the first base.

I have no outs, and I try with one out.

Eligible for the random prize:

Return to “Golden Era Game of the Week”