You're trying to use a different type of control than the Pole Position code expects. I don't think there's anything in MAME you can change to compensate for this.

I don't know if there are any ready-made steering wheels out there that work like Pole Position's but some people have, with some difficulty, rigged actual Pole Position steering wheels for PC/MAME use. Then they have to deal with the fact that MAME handles the shift differently, and someone actually created a special MAME version for that. (ShifterMAME).
John Cunningham (JTC)

Yeah, it seems that the only option is to either use an original control panel, use a spinner or hack a mouse to get the correct steering input in MAME. Oh well, I needed a winter project anyway

i had the same problem
i use a logitech dual action gamepad
looks like a PS2 controller
got 12k for 1st a few months ago... http://replay.marpirc.net/inp/6/b/e/tar ... olf153.zip
maybe someone could do better ?
Top

I haven't tried it myself yet - but I found a program called "xpadder" , which I believe can be found as a torrent for free. My problem is MS Dual Strike controller "mouse mode" emulation. Damn Microsoft, cant use my hacked Star Wars yoke well in anything above Windows XP.

Not sure if that prog can help you though. Or me, since the page claims mouse emulation is still off. Tell us (me) if you try it and it works...
Top

tar wrote:i had the same problem
i use a logitech dual action gamepad
looks like a PS2 controller
got 12k for 1st a few months ago... http://replay.marpirc.net/inp/6/b/e/tar ... olf153.zip
maybe someone could do better ? 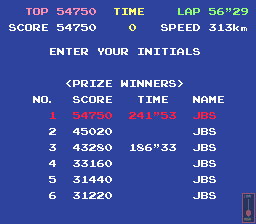 but it would be so much better playing with a wheel

The TJT: Newer seen that controller before. That looks interesting. I'm thinking about making a wheel out of an old mouse. That should work better with Pole Position.
Top
Post Reply
6 posts •Page 1 of 1